Morning seemed to come too soon. It was an awkward night. Maybe we had pushed ourselves too far the previous day. There was the unfamiliar motion of the ship, and the distracting irritation of what turned out to be a tube of lip balm rolling back and forth on the nightstand during the night, click-clack, click-clack, over and over again. We were both too tired to reach over and investigate the source. Still, we managed some few hours of oblivion before rising to search out coffee.

While we slept, our vessel made scheduled stops, for people, cargo, and mail, overnight at Florø, Måløy, and Torvik. The first stop at Ålesund, at the mouth of the Geirangerfjord, was while we were still at breakfast. Such was the working rhythm of the MS Spitsbergen, a unique combination of practical boat and cruise ship.  In the early afternoon, after watching the western coast of Norway slip by, we moored in the Norangsfjord (an arm of the Hjørundfjord) and took a tender to the dock at the small village of Urke in Møre og Romsdal. We spent a pleasant hour in the light misty rain wandering past the rustic houses, snapping pictures of the grazing sheep, collecting quartz from the rocky strand, and listening to a mountain stream spilling into the fjord with a great and turbulent rush of sound.

Later, we returned for a second stop at Ålesund. We disembarked and wandered the town for an hour, capturing image after image of the striking Jugendstil (art nouveau) architecture, almost the whole of the town rebuilt after a devastating fire in 1904. This is what we enjoy the most, wandering on our own down cobbled streets, peering at decorated doorways and facades, looking into shop windows and, in Ålesund, admiring an exotic and fanciful variety of rooftops: gables, towers and spires. We posed—an obligatory moment—in front of the MS Spitsbergen before embarking again, the huge letters on the black and red-painted bow announcing its presence to the gathering travelers.

The MS Spitsbergen in Ålesund, 2018

We met for dinner, our little group of wanderers. During a wonderful repast of Norwegian specialties, we recounted our day to one another. We reminisced about trips taken and dreamed about the journey ahead. We recounted misadventures we had experienced on previous travels, perhaps to ward off the mishaps that sometimes befall even the most seasoned of travelers.

Tomorrow brings Trondheim, the Nidaros Cathedral, and Rørvik in Vikna—Vikna, where Martin Cornelius, Joan’s grandfather, was born. Sometime before midnight we will pass by Leka and look for it in the velvet dark just as Great-grandmother Cornelius had done one night eighty-six years ago.

When we first made plans to book our Hurtigruten cruise, it had dawned on Joan that our itinerary reminded her of a trip up the Norwegian coast that had been taken by her great-grandparents. In 1932 Casper and Gjertine Cornelius, who had emigrated from Norway in 1887, returned to their native home for a three-month visit after a forty-five-year absence. Joan had heard about this trip as a child. It was an event that held some significance for the family and was discussed long after her great-grandparents themselves had passed away in the 1940’s. Casper and Gjertine had returned to a homeland they had left behind with great sadness and regret. They had been forced by economic circumstances to try their luck in a strange, foreign land. This belated homecoming must have been bittersweet. Joan actually never knew (or remembered) that a travelogue from this 1932 trip existed and came across the treasure only a few years ago in a box of old photos and papers inherited from her parents. She discovered a twenty-seven-page journal entitled Norges Reise i 1932 [Norwegian Journey, 1932]. Great-Grandfather Casper’s original travelogue was in Norwegian, the language he was most comfortable speaking and writing, even after forty-five years in America. What Joan had actually found was not Casper’s original, but a translation into English by her grandfather Martin. If the Norwegian original still exists, we do not know where it is or who may have it. Among the many activities Joan’s great-grandparents undertook during their three-month stay in Norway was a trip on the SS Stavangerfjord that took them up the Norwegian coast to the North Cape. For some reason she remembered a small detail from the journal, that her great-grandparents had left Bergen at 8 p.m. to journey up the coast to the Nordkapp. Our itinerary on the MS Spitsbergen had us scheduled to leave Bergen at 8 p.m. as well. Could her great-grandparents have, coincidentally, also taken a Hurtigruten cruise?

Ebay solved the mystery for us quickly when we located and subsequently purchased a 1930’s brochure for a “Midnight Sun Cruise”:

Visit Spitzbergen, Its Arctic Fjords, North Cape, and the Glorious Fjords of Norway on SS ‘Stavangerfjord’ of the Norwegian American Line.

The brochure promised tourists a journey “with Norsemen, the Pioneers of the North”—as if further enticement were needed! So, no, it was not a Hurtigruten voyage, but a similar journey with many of the same ports of call. And so, it was today, September 14th, that we began tracing the northern part of the coastal voyage that Joan’s great-grandfather and great-grandmother had embarked upon in 1932. Today’s voyage was both a gift to our traveling companions, son Justin and daughter-in-law Andrea, but also, for us, a memento mori, a reflection on mortality and the passage of time. Eighty-six years had passed since Great-Grandma and Great-Grandpa completed their voyage, but it will be remembered still in the voyage we embarked upon today.

Bergen didn’t seem to want to let us go. After we left the Hanseatic Museum in Bergen, it was still raining katter og hunder. We were soon soaked to the bone during our walk from the Bryggen waterfront to the Hurtigruten terminal, fighting the wind and driving rain with our umbrellas and weather gear, none of which seemed up to the daunting task.

We arrived, eventually, at our destination dripping and squelching. We camped out at the Hurtigruten terminal lounge for a short while, meeting up with our companions, who had, wisely, remained warm and dry in a café. Boarding at 4 p.m., we quickly arranged ourselves in the aft lounge—locating hot coffee and tea and finding out, much to our delight, that we had been upgraded to “select” status. We struck up a conversation with a pair of couples from Minnesota, all with Scandinavian heritage, and compared ancestral notes. Joan of course, as always, was the most Scandinavian in this transient group of adventurers. These were ephemeral travel friends, easily made, often soon forgotten, a phenomenon not uncommon on any trip. Sadly, we have already misplaced their names. 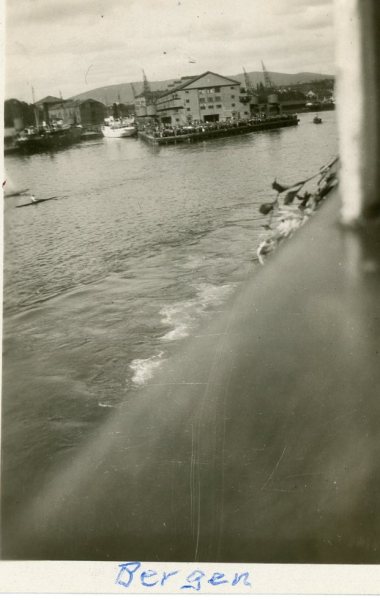 When we went to our cabin at 6 p.m., a pleasant surprise awaited us. It was roomy, with a queen size bed, fluffy duvet, and two gigantic pillows fit for storm giants. There was more room in the cabin than in some hotels we’ve occupied recently (Birger Jarl in Stockholm, we’re talking about you). Rested and refreshed, we headed to the ship’s dining room. At the huge buffet there was more seafood than one could imagine. But this, on further thought, should have been of no surprise on this most quintessential of Norwegian coastal cruises. Our small family group found a viewing lounge and watched the MS Spitsbergen, our home for the next week, pull out of the Bergen harbor and begin its voyage up the Norwegian coast. It was 8 p.m., the same hour that Joan’s great-grandparents, Casper and Gjertine, had left Bergen on July 10, 1932, to begin their coastal adventure. Only unlike us, Bergen had favored them with good weather. From reading Casper’s journal, we were pretty sure he took lots of photographs, and yet only three survived among the ephemera that Joan had inherited. One was of their departure from Bergen. The first of our own coastal adventure photographs was snapped. A sliver of bright Norwegian moon appeared low in the sky. Gray storm clouds lowered. The sun played a brief game of hide and seek with them. The tangible quality of the light—the intense emotion of this indescribable experience—washed over us.

Afterwards we ventured onto the open upper deck as night descended, peering into the dark ahead, facing into the wind, leaning into tomorrow as eagerly as we could. Finally, a long day of waiting, walking, and wetness had worn us down. A deep, but satisfying weariness descended quickly. We barely made it through our showers and bedtime rituals before throwing ourselves into starched white comfort—while the MS Spitsbergen sailed steadily northward toward tomorrow’s waiting adventure.