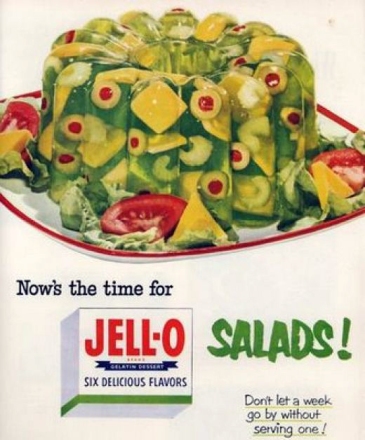 Greg keeps a daily calendar on his nightstand, a paper page-a-day calendar received as a Christmas gift—because otherwise he’s gone all digital with calendars nowadays. The calendar reminded us that February 8 is the first day of National Jell-O Week.

Ok, maybe we weren’t really reminded; in truth, we weren’t even aware that there was a National Jell-O Week. But we weren’t really surprised either. There are, seemingly, an endless number of designated days, weeks, and months to promote causes, raise awareness, honor dead people, and commemorate all kinds of historical events.  These named and designated chunks of the calendar are not holidays, like Christmas, Presidents’ Day or the Fourth of July. Many of these are something less, something more trivial and capricious, the poor relations of holidays, holiday wannabes.

The first Friday in June, for example, is “Hug an Atheist Day” and also “National Doughnut Day.” Some wise folks on Twitter and FaceBook have suggested, waggishly, that we be economical with our time and combine these two into “Give An Atheist A Doughnut Day.” Not a bad idea: a holy pastry for the devoutly unholy.

February alone has “Baked Alaska Day,” “Clean Out Your Computer Day,” “National Day the Music Died Day,” “National Thank A Mailman Day,” and an “International Pancake Day.” For those who need more time than a single day can provide, February also boasts “Solo Diners Out Week,” “Random Acts of Kindness Week,” and “Condom Week.” Guess which venerated romantic holiday falls during Condom Week every year?  February is also the month set aside as the “Bake for Family Fun Month,” “International Boost Your Self Esteem Month,” “Return Shopping Carts to the Supermarket Month” (no problem if, like us, you shop at Aldi’s and want your quarter back), as well as “Eat Ice Cream for Breakfast Month.” So why shouldn’t Jell-O, too, have a week set aside to celebrate its distinct and important role in American quasi-cuisine?

National Jell-O Week was a brainchild of the Utah state legislature. It was first declared an official week in 2001 and is now celebrated annually every second week of February. It is unclear whether the Week is for Utah residents only or if any of us can celebrate the venerable but wiggly concoction. Utah claims to have the nation’s highest per-capita consumption of Jell-O, thus, it is no surprise that Jell-O is also Utah’s official state snack. If you doubt the veracity of our gelatinous tale, you can read Utah’s original “Resolution Urging Jell-O Recognition” here: http://www.le.state.ut.us/~2001/bills/sbillenr/SR0005.htm

Although Jell-O was invented long before baby boomers came along, it was really during the decades of the 1950’s and 1960’s that Jell-O came into its own, grew into its mold, so to speak. For a certain class of people—you know who you are—Jell-O was served everywhere and at all times. Jell-O was a staple at church pot-lucks (at least at Lutheran ones, Joan can attest), children’s parties, in school cafeterias and in our homes, especially when there were large family gatherings.

Back then Jell-O didn’t come in some of the “unusual” flavors you can buy now, like blueberry (because back then blue Jell-O would have just been “weird”), watermelon, “tropical fusion”, and margarita.  We were served the relatively simple, Jell-O “Classic” flavors: orange, cherry, strawberry, lemon, lime, grape, and the ever-present raspberry (never one of Joan’s favorites!).

During the two decades when we baby-boomers grew up, prepackaged and easy-to -prepare foods also came of age and into vogue. And what could be easier that adding water to a package of Jell-O? It was likely one of the first foods our moms allowed us to make (yes, women pretty much did all the cooking—even Jell-O making—back then). Jell-O was so easy to make, it became the subject of classic “Yo Mama” jokes: Yo mama is so stupid she can’t make Jello; she can’t fit 2 quarts of water in the box!”

That didn’t mean, however, that Jell-O wasn’t used in all kinds of creative or unusual ways. Speaking of unusual, back in October Joan read Scott Berkun’s latest book, The Ghost of My Father (http://scottberkun.com/). In the book he recalls his grandmother offering him hot Jell-O to drink, which he admitted sounds “disgusting now but was sweet and warm then….”

We ourselves never tried hot Jell-O, but looking back, many of the Jell-O dishes we were served back in the day now seem bizarre and disgusting. At one Lutheran church supper Joan remembers having something called “Perfection Salad” that was anything but. It had pieces of celery and (to Joan’s horror) olives in it. During our childhood years there were actually vegetable flavors of Jell-O, including celery and tomato! These are mercifully now extinct.

While hunting through her mother’s old recipe box, Joan discovered a recipe for something called a “Green Gold Salad.” It is similar to a gelatin dish called “Sunshine Salad” that you can find on the web. The recipe called for a box each of lime and lemon Jell-O to which three grated carrots (“salted” no less!) and canned crushed pineapple were added. Fortunately for Joan and her siblings, this recipe never made it to the family table because Joan’s mother hated pineapple in all its forms.

This isn’t to say all our Jell-O memories are of unappetizing concoctions. Joan’s mother Ruth made a delicious “Frosty Orange Dessert” recipe using orange Jell-O, orange (or lemon) sherbet, and mandarin oranges. This dish is still served as comfort food on holidays in the Shreve household. For occasions like Christmas Joan’s Grandmother Tilla prepared a so-called “Jell-O salad”, quite simple in its ingredients and presentation. Her grandmother would make lime Jell-O in a rectangular pan and press canned pear halves into the gelatin. Once they were chilled, she would cut the Jell-O into individual rectangles, each rectangle with its own pear half. She would carefully place the rectangles on a bed of iceberg lettuce on individual salad plates. Good, simple comfort food. A classic any good Lutheran girl from the mid-West would recognize! 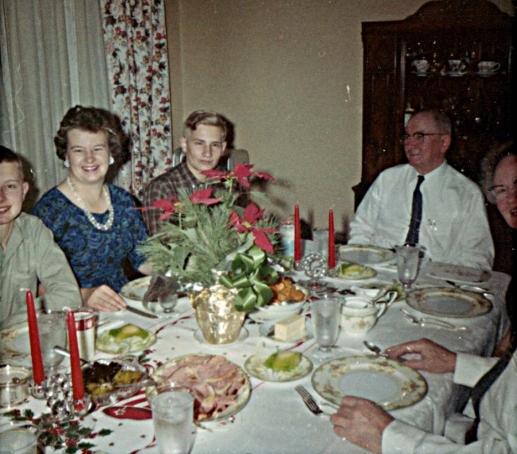 You can’t think back to the Jell-O of the 1950’s and 1960’s without also thinking about Jell-O molds. Tupperware parties were all the rage, and Jell-O molds were, of course, included in the Tupperware product line. Joan’s mom had a “Jell-N-Serve” mold that had interchangeable lids. You could choose a different design to “top off” your molded gelatin: a star, Christmas tree, tulip, or heart.  Here for your delectation is that sherbet and Jell-O mandarin orange recipe we mentioned earlier as prepared for Thanksgiving many years ago in a “Jell-N-Serve” mold.

In Joan’s childhood (Lutheran) household, cheesecake was an unknown dessert. Her first introduction to cheesecake came via Jell-O pudding, when she heard about the now classic Jell-O No-Bake Cherry Cheesecake recipe and prepared it for her soon-to-be sister-in-law’s bridal shower in 1967. According to Wikipedia the Jell-O pudding “No-Bake” dessert line was launched the previous year, in 1966. The cheesecake Joan made required no baking, and was quick and easy. If you Google it, you’ll see the recipe is still very popular.

In the tumult of the late 1960’s, children of the Jell-O generation began to experiment with change. We changed our hair styles, our dress; we revolutionized our music and our sexual mores. We experimented with spirituality, communes, and obscure and mysterious substances.

But, on a more mundane level, we also expanded our culinary horizons. For Joan the Jell-O cheesecake recipe was a revelation, a seductive gateway to more exotic foods to come. Learning that cheesecake even existed was the beginning of a new gustatory and culinary awareness. It’s difficult to imagine now, but back in the homogeneous culture of the 1950’s and early 1960’s many of our generation had never eaten lasagna, tortellini, sushi, knockwurst, burritos, croissants, Reuben sandwiches, baklava, tacos, or even, yes, cheesecake. Pizza was eaten, yes, but never as a meal, only as a special snack or by teenagers on dates. So many ethnic foods, now normal parts of today’s everyday cuisine, were unknown to us back then.

Jell-O, in its simple, uncomplicated way, and certainly without intending to, was a symbol of our culinary innocence, our white-bread palates, our ignorance of a vast and variegated world waiting to feed us with so many wonderful and delectable foods.  Happy National Jell-O Week!